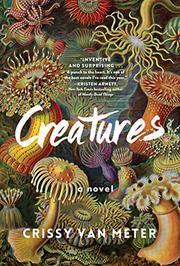 Ok, it’s taken me longer than I thought to write this review. Partly because I had to stop and start and re-read a good portion of it because, well because of life, and partly it is the type of novel I needed to read carefully because I REALLY LOVED it. There were so many layers in time, in style, in character development. I wish I had this novel in hard copy so it would have been easier for me to flip back and forth to reread parts, confirm interpretations, link events etc. This novel, at times, reads like a  fairytale complete with villains and heroes and fantastical ocean creatures. In this instance, however, our protagonist, Evie, is in no need of a handsome prince be it her husband or her father, to save her. No, in fact, she can save herself, thank you very much, be it from a deadly storm coming in over the ocean and wreaking havoc on the island, or from a group of men who know she is carrying the best weed (Winter Wonderland) on the island, in her backpack as she makes her way home

I can’t wait to see what this book looks like when published. I am intrigued by the way it is organized. Parts read like poetry, parts read like a short-answer exam, parts that read almost as a journal, and parts that are told from an adult Evie before and after her wedding day.

Our protagonist Evie, has to pretty much raise herself. Not quite an orphan because both her parents actually “exist” albeit in varying degrees. Evie’s parents are either literally absent or absent due to the ingestion of substances, controlled and otherwise. Honestly, I was more worried about Evie’s broken friend Rook who seems to be on a road of self-destruction. I’d like to know more about her back story. What is she motivated to do what she does? Why does she seem to have a death wish of sorts? What is it about Evie that she is so attracted to? Is it Evie’s strength and good nature that seems to sustain her no matter the circumstance?

The story is also about the failure of a father trying to convince his daughter/or himself that they are fortunate to live such an adventure (as being homeless and selling drugs for food) because facing reality would be devastating. Why is it always daughters who have to stay behind and keep their fractured fathers together long enough to see themselves into adulthood?

I would seriously consider using this novel in a high school English class. Not only is it a strong study in character and theme, but it is also a great example of HOW a novel can be written. Often we encourage our students to read “mentor texts” so that they can see first hand how impactful creativity in storytelling can be. There are so many beautiful phrases that can generate reflection in their profundity.