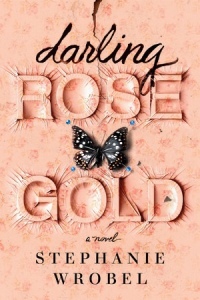 It is the dead of winter where I live, -35C with snow and a killer wind chill. There is nothing else to do but go straight home after work, crawl under a quilt and read. Thankfully Simon and Schuster Canada through Netgalley sent me an advanced reading copy of Darling Rose Gold by Stephanie Wrobel. I was the perfect read for a frigid winter evening. The story captured my interest immediately, maybe because the story is familiar. Based VERY loosely on the true story of Gypsy Rose Blanchard and the abuse she endured throughout her childhood by her mother Dee Dee….which ended in murder.
Instead, this account puts our victim in the “driver’s” seat, so to speak, where Rose gold testifies against her mother, thereby retaliating against her abuser by putting her in jail. She then spends the next five years plotting how to get her revenge against her mother.
The story is written from various points of view from multiple timelines. One timeline takes place during the five years Rose Gold’s mother “Patty” is serving time in jail. Here we learn how Rose makes her way in the world independent of her mother manipulation with only the help of the neighbour. Rose learns to drive gets a job and buys a house (which happens to be her mother’s childhood home), and continues her online relationship with her boyfriend, Phil. It is during this time of her mother’s incarceration that Rose Gold’s father makes an appearance apologizing for not being “there” for her. Rose is happy to have a father in her life because Patty made her believe her father left them and died of a drug overdose. Rose Gold is overjoyed to have her father in her life…but how much will he expect from him? How does she feel about the new family he had made for himself.
The second timeline is when the mother Patty is released from jail and attempts to return to the life she had left. The same town in the same neighbourhood, the daughter whose testimony landed her in prison in the first place.
Oh my goodness, I did not know who to trust in this novel. Obviously not Patty who is an egotistical manipulator who feels the world owes her for all the “good” she claims to have done in the world including being the perfect mother. Has Patty learned her lesson after five years in prison? Will she own up to the physical, mental and emotional harm she caused her daughter and make amends?
Can we, as readers, trust Rose Gold? While I was reading, I couldn’t help but feel there was something “off” with this girl. I kept telling myself it was because of the abuse she suffered under the hands of her mother that made her so clingy and bitter. Horrifyingly enough, there are glimmers, flashes actually of her mother in her…like when she lies to manipulate a person or situation to get what she thinks she deserves. And Rose seems to do so without remorse-just like her mother. Is it her fractured upbringing that makes manipulation the only way she knows how to survive independent of her mother? Or maybe it is because “there is always a special bond between mothers and daughter- but sometimes it goes horribly wrong”.
I loved this book. I finished it in an evening. I found both Patty and Rose such tragic characters I couldn’t wait to reach the end of the novel to see how and if they survived the lives they created for themselves.